Umar used to spend all his time on is computer which has been adapted to suit his needs as he really enjoys interacting with friends online playing video games.  Now, his family takes up much his time outside university and they often travel between his home country and the UK.

Umar has always worked in universities and was a lecturer before deciding to take up computer science as a second degree.  Formally linguistics was his main interest and he taught students English in his home town and often helped out with translations from Arabic.  He grew up in a household that encouraged him to compete at school in all activities despite his cerebral palsy that made him appear very uncoordinated, affected his mobility and dexterity.

Umar has always spoken rather hesitantly, but relatively clearly, so lecturing was not a problem, although speech recognition never really worked for him.  He also tried eye gaze in order to access his computer, but found it very tiring because keeping his eyes fixed and still on an object was difficult.  So Umar largely depends on keyboard short cuts, predictive software, with built in macros using autohotkey, filter keys and a programmable position joystick.  Recently he was also able to afford an Xbox Adaptive Controller that made all the difference to the speed at which he could play games once it had been set up to suit his preferences with his mixed access technologies depending on the time of day and feelings of tiredness.

Keyboard access still takes time, but as long as Umar has his specialist expanded keyboard and uses his own computer he can work successfully along with his fellow students.  However, where barriers do occur such as being locked out due to timeouts, with for instance online banking or secure applications, his patience can be sorely tested.

Umar needs to take breaks but finds that additional ergonomic aids such as a good chair, two raised monitors linked to his laptop and the spring back keys on his keyboard, help to prevent some of the effects of fatigue.   In the past he used his phone with a Bluetooth connection to his keyboard, so that he could type messages, but he has found several companies now offer better links to apps, his joystick and other assistive technology devices such as Tecla.  He also finds adapting the phone notifications, so they appear automatically stops him worrying about missing events and larger fonts and app icons have also helped.  Bigger buttons mean there is more likelihood the touch screen can be used. Umar has also tried other accessibility options that are available on both the Android and iOS systems.

Multifactor authentication.  Umar has set up a series of three-word passwords with a macro and uses a password manager for initial log-ins but if multifactor authentication is required he prefers to use finger recognition as long as he can keep his hand steady.  The problem is that biometrics are rarely used for website access so that is when Umar has to depend on his password manager and the Microsoft authenticator app to access secure sites such as his university login and for remote learning. (Web Content Accessibility Guidelines (WCAG) 2.2 Success Criterion 3.3.7 Accessible Authentication)

Keyboard Access is essential for Umar as he really finds using his joystick with the pointer accuracy required for some tasks difficult.  Single tabbing and using link lists and headings with macros all help with navigation but depend of the accessibility of the website.  He sometimes prefers to use his Xbox adaptive controller when feeling tired, as it offers switch access that can also be mapped to various access actions. Microsoft offer a list of keyboard shortcuts in apps

Keyboard remapping available in any application helps Umar as much as it helped Faith.  The WebAim team provide a very useful table that covers the standard keystrokes, but Umar tends to use his autohotkey personalised keyboard mapping

Skip Navigation Links  can be really helpful when wishing to get to the main part of the screen rather than having to tab all the way around and for Umar it is important that he sees this feature as he does not use a screen reader (Webaim guidance).  WCAG Success Criterion 2.4.1 Bypass Blocks  “Because navigating by headings or regions is not supported in most browsers, WebAIM recommends a “skip” link (in addition to headings and regions) to best support sighted keyboard users.”

Make dynamic content accessible this applies to everyone, but for Umar it is essential that all types of dynamic content react to keyboard use not just a mouse hovering over an item or a modal window that appears without activation or error messages that prevent an escape route.  IBM offer some potential Coding interactions – Dynamic content.   “Success Criterion 3.2.1 On Focus (Level A): When any user interface component receives focus, it does not initiate a change of context.”

Headings for easy access.  This is not just about using consistent Heading order but being clear about titles and their meaning to help Faith quickly scan down content especially if there are important instructions.   This can help her concentration as well as make it easier to navigate.

Media player access.  Once again this is about using the keyboard to control:

“I find small links, such as individual letters in an alphabet list really annoying when having to access a glossary if a search is not provided – too small to touch accurately or use with my joystick and too long for constant keystrokes. Either add white space around them or offer an alternative!”

AbleGamers have produced a really helpful guide for developers about making ‘Accessible Player Experiences (APX)‘ that can be applied for any app development.

Faith recently had COVID-19 and this really affected her arthritis.  She felt so tired and upset at times.  She was very upset that all her work was being affected by feeling as if she had brain fog, as well as having depleted levels of concentration.  On top of all the COVID challenges, she developed repetitive strain injuries (RSI) trying to cope with her studies as well as life in general.  Despite the fact that Faith’s family were now away from home much of the time, she was struggling but determined to finish her third-year project that involved access to virtual worlds with the development of three-dimensional (3D) Internet environments.   This was exciting, interesting but a challenge with a write up, as well as all the coding.

Having been an administrator, she had been bored with the endless spreadsheets and databases and decided to return to her love of mathematics and design rather, than looking at poorly developed user interfaces.  She wanted to be more creative and create ideas around virtual worlds that involved outdoor environments and in particular intricate garden designs, as this had become more than just a hobby.   However, as her arthritis progressed and now her RSI was really affecting her dexterity, she was concerned that she would not be able to cope with so much mouse work, such as click and hold to grab a screen or multiple clicks to drag and drop items.

Taking breaks had become essential and accessing controls via keyboard shortcuts seemed to help, but the latter was not always possible when creating demonstration applications.  Faith found she needed to use her left hand more and keep her right forearm in the handshake position to prevent the RSI pain.   Using an upright mouse with a roller ball on the side or a pen stylus solved some issues.  She really liked to be able to step through her worlds using single keys to move around and had her Mac set up with several personalised keyboard shortcuts using Control accessibility options with her keyboard.  Speech recognition was good for much of Faith’s writing, when she used the dictation settings and Voice Control for the main navigation challenges on the computer.  However, remembering all the commands was hard, so Faith resorted to a crib sheet!

Multifactor Authentication. Faith finds fiddling with two devices really difficult especially when she is then required to copy a code or manage a series of numbers. She much prefers to use biometric forms of verification, such as speech, face or finger recognition; her computer and phone have her preferred finger recognition. At the moment she cannot remember passwords or phrases let alone three random words. Faith has to cope with the Microsoft authenticator app to access university sites and has a password manager system for online access. (Web Content Accessibility Guidelines (WCAG) 2.2 Success Criterion 3.3.7 Accessible Authentication)

Keyboard Access  “Speech recognition can be used for dictating text in a form field, as well as navigating to and activating links, buttons, and other controls.” (W3C WAI speech recognition accessibility) The link to making this possible is to ensure that all these controls are keyboard accessible and then the mapping of the commands will work with voice controls.    Example of how other criteria linked to WCAG compliance help solve the challenges faced by Faith

Keyboard remapping available in applications in order to personalise keyboard controls and make it easier to access app components.  The WebAim team provide a very useful table that covers the standard keystrokes that Faith uses for the browser interactions, with hints that enhance accessibility.

Control and navigation labelling for speech recognition.  The way controls are labelled can make all the difference when accessing sites using a keyboard or speech.  Faith finds she has to use her spoken command crib sheet more and more to access controls and to navigate around pages if she cannot use her mouse and these commands depend on the labels that have been used by the developer.

Skip Navigation Links  can be really helpful when wishing to get to the main part of the screen rather than having to tab all the way around and for Faith it is important that she sees this feature as she does not use a screen reader (Webaim guidance).  WCAG Success Criterion 2.4.1 Bypass Blocks  “Because navigating by headings or regions is not supported in most browsers, WebAIM recommends a “skip” link (in addition to headings and regions) to best support sighted keyboard users.”

Headings for easy access.  This is not just about using consistent Heading order but being clear about titles and their meaning to help Faith quickly scan down content especially if there are important instructions.   This can help her concentration as well as make it easier to navigate.

“The worse thing is that I have to take regular breaks now because my concentration goes and I know if I spend more than half an hour continuously using my mouse I will be in pain for the rest of the day. I really want technology applications that are used for designing and developing apps to be more accessible as well as the apps themselves”

AbleGamers have produced a really helpful guide for developers about making ‘Accessible Player Experiences (APX)‘ that can be applied for any app development. 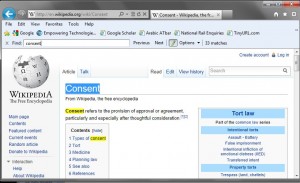 “I would find that when I am reading poilicies which have so much text to read, I go to the  summary and then use the find and just go to the specific bit. If you know you need a specific item such as ‘consent’ – then use Ctrl +F [Command +F], add the word to the search box and find it directly.”

Crazy: 90 Percent of People Don’t Know How to Use CTRL+F

This week, I talked with Dan Russell, a search anthropologist at Google, about the time he spends with random people studying how they search for stuff. One statistic blew my mind. 90 percent of people in their studies don’t know how to use CTRL/Command + F to find a word in a document or web page! I probably use that trick 20 times per day and yet the vast majority of people don’t use it at all. (Alexis Madrigal)

These pages show our most recent news or strategies. Search or browse by using the Tag Cloud.