Otter creates voice notes that combine audio, transcription and speaker identification for free on a desktop/laptop computer when online and with mobile and tablet apps.

Otter is a real time speech recognition service, that can recognise different speakers in recorded sessions, allow you to download the output in text and audio as well as SRT.  It is really quite accurate even when using a desktop microphone with clear English speakers in a small room.  We have found it useful for note taking and transcribing interviews but have not tested it in a lecture theatre.  The free online version of Otter offers 600 minutes of transcription per month with unlimited cloud storage and synchronisation across devices.  Visit the App Store or Google Play for more features and reviews. 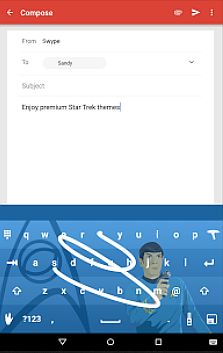 “I have been using the Swype Keyboard that comes with Dragon speech or voice recognition for long time on an HTC mobile running Android OS and despite the lack of a personalised voice profile, my accent, and even when used in very noisy locations like public transport or cafes, I have been very impressed by the accuracy.

Swype + Dragon is made by Nuance and uses their voice recognition server in order to convert speech-to-text.  There is a trial version on GooglePlay, but if you want to continue using, it would costs you 59p.

Alternatively the Goggle Keyboard (free) comes with its own speech-to-text, although in my experience it was less accurate when compared to Swype.

Speech-to-text on a portable device like an iOS iPhone/iPad or Android phone or tablet, is quite different than having Dragon NaturallySpeaking or DragonDictate installed on a PC or Mac. The speech or voice recognition process on a portable device requires an Internet connection, since the conversion/processing is made on a remote server, and not on the device itself. So literally, your recorded voice will be sent to the US, get processed in the Nuance server and then sent back to your screen.  There is no specific customisable voice profile on a portable device, that can be used in order to improve your accuracy, nor can specific words  be added to the Vocabulary. For example every time I say ‘Enrico’, Dragon on my mobile transcribes “eriko” and there is no way for me to make a correction. Also Dragon installed on a proper computer, can learn to recognise very heavy accents, the same is not true for the cloud-based services.

Look out for Dragon Anywhere an app for Android and soon iOS.

“I like to generate a transcript of a lecture session and I use speech to text to dictate into my mobile or I record the session”  D.T.

There are several ways of dictating and producing text on the mobile – iPhone has built in speech recognition (Siri) for many of its apps or the use of Dragon Dictation when online that allows short paragraphs to be dictated and collected within its own note pad. Android has Dragon mobile assistant and if you want to experiment there is Utter in beta mode for commands.  It does not make the Android totally hands free, but it shows the beginning of an off/online conversation with reactions!

These pages show our most recent news or strategies. Search or browse for the strategies by using the filter options.

You can also add you own strategies and comment on others.