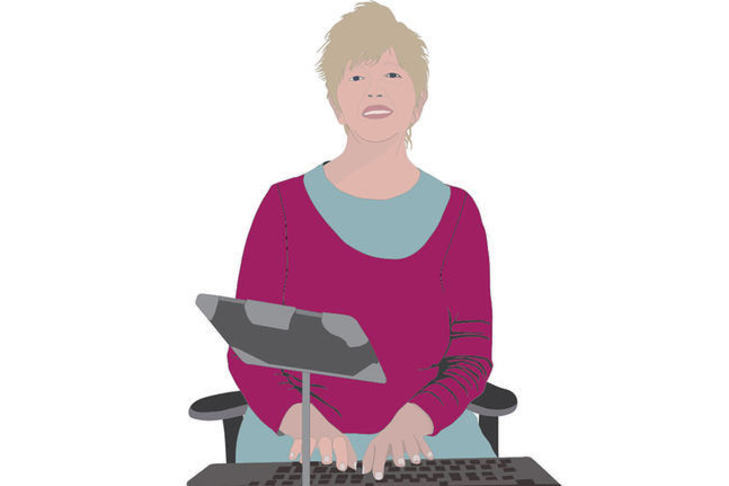 Mary is 35 years of age and taking a part-time Data analytics for health course. She has had rheumatoid arthritis since childhood with symptoms that can vary over time from mild discomfort to real pain affecting her dexterity and general mobility.

A day in the life of Mary

Mary manages data entry for admissions and discharges in her local hospital as a part-time job as well as her statistics course. In addition she is a clinical coder whose main duties are to analyse clinical statements accompanying admittance and discharge notifications and assign standard codes using a classification system. The data produced is used for medical and health services research and has been useful for Mary’s degree course.

When the rheumatoid arthritis flares up, Mary suffers from swelling, stiffness and pain, with occasional numbness and tingling in her hands, wrists and elbows. She also suffers from back and neck pain. This makes it difficult to move around and do everyday tasks. Flexi-time allows her time to exercise to loosen up and to build in days away which she can use when the symptoms flare up badly.

For many years Mary used a standard desktop PC with mouse and keyboard. She had a keyboard with a gel pad to support her wrists and this allowed for reasonably effective data entry, mostly without serious discomfort.

The mouse, though, was an altogether different story. It was difficult to grip. The lateral arm movements required, caused pain and discomfort in the wrist and upper arm. Recently her workplace and her university have replaced many of the desktops with laptop computers. The laptop worked well in some respects with a touch pad reducing lateral arm movements, but carrying it around caused back and neck pain.

Increased use of digital documents and constant keyboard use meant that Mary needed to take breaks and at times she preferred to print out documents if she was researching something for her own work. Screen time had to be carefully managed to prevent further posture problems.

To overcome these issues Mary acquired a lightweight tablet computer. However, it took a bit of getting used to. She found that the way she held the tablet initially could cause further aches and pains.

After some research she discovered the university provided certain accessories, such as cases and stands, to prop up the device at a minimum 45-degree angle helped her to keep proper spine alignment and reduced strain on her joints whilst using an additional keyboard. She also invested in a lightweight tripod stand with adjustable height control that gave her the best posture.

Mary took advice from the assistive technology centre who suggested using touch assistance for more difficult gestures when using a tablet and also discussed the use of etexts, using an ebook reader with text to speech and larger fonts. The library had carried out an ebook accessibility audit so they knew which etexts were accessible.

Mary has also found that being able to use the recordings from lectures on her tablet has meant that she is not so concerned when she misses a lecture or has to leave early when sitting for long periods becomes an issue.

A portable Bluetooth keyboard made of silicone which rolls up into her bag has been her best buy to-date along with a medical speech recognition system for tablets. It seems to be accurate and to offer a positive alternative for large data entry tasks where forms can be long and have many fields.