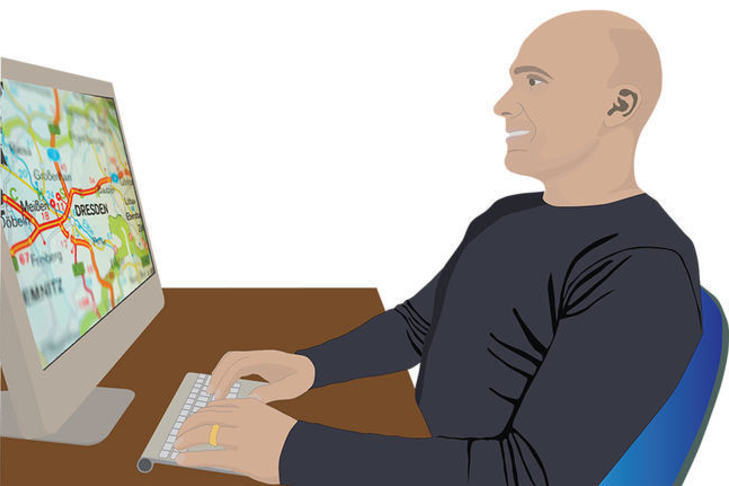 Alexander is 36 and lives in Dresden in Germany and is taking a distance learning Master of Business Administration (MBA) course. Alex has minor vision problems; he cannot distinguish red and green colours, like 10% of the male population. Some people confuse this condition with achromatopsia (full colour blindness), which is actually very rare.

A day in the life of Alexander

When Alex was at university, he had problems with some of the lecture materials, mostly when they contained graphs with colour-coded legends. Classes on statistics often used line charts and Alex could not always figure out the difference between lines describing the evolution of the net profit of several companies. The same problem occurs with bar charts, where the bars are only distinguishable by colour and not by different textures.

Alex is now taking a MBA course whilst working in a bank which he really enjoys and they are now providing him with the means to be able to afford a car! He used to be dependent on public transport and had trouble reading coloured underground and bus network maps. He no longer needs to ask for help as he has satellite navigation in his car that can be controlled through speech recognition and the system reads out the route. Traffic lights pose no problems, as long as there isn’t too much sunshine and his smartphone has colour filters that help with map reading and other colour dependent systems.

Today, Alex returned home later than usual. He had to look at some charts containing financial data with red and green sectors adjacent to each other. Alex accidentally mixed them up because the data did not have sufficient contrast or hatching. As a result, the presentation he prepared based on the data drew incorrect conclusions. He was lucky that a colleague checked the slides but it took another 3 hours to rewrite the text and get additional images to support the new conclusions.

Challenge 2: coping when colour symbols are not offered alongside recognised alternatives

At the weekend, Alex aims to catch up with his other assignments, but has discovered that the course organisers have built a new upload site with some poorly contrasting symbols to indicate success or failure, he decides to experiment with Visolve to improve the situation but the designers should have followed WCAG 2.0 guidelines on colour.

Later Alex aims to follow the trails around Dresden to get some exercise. They are all marked with many spectacular views, and the university has several maps on offer (in case he loses connection on his smartphone) but he usually finds they have red and green markings without explanations or different shapes, so they all appear similar and the signs along the way are the same. His girlfriend has become a good guide!